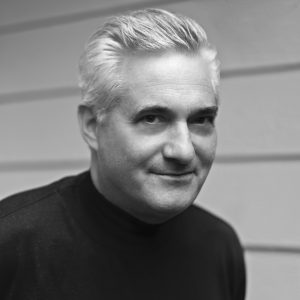 Jim Faris started his career using 15th Century technology as a typesetter and letterpress printer, most notably with his mentor and lifelong friend, Jack W. Stauffacher. In recent years, he has led design teams on the leading edge of technology for the 21st Century, such as the Android operating system (Google) and Skype (Microsoft).

In the 1980s, Jim did print and exhibit design at CIBA-GEIGY and was Director of the graphic design department at MoMA in New York. He co-founded Alben+Faris with Lauralee Alben and relocated to Santa Cruz, California in 1990. Alben+Faris became one of the first firms to specialize in visual interface design, working on Macintosh operating system (OS 8), web sites including the 2000 Webby People’s Voice winning design for the Monterey Bay Aquarium, and collaborations on new technology for major companies and Silicon Valley startups.

Jim has taught courses and given presentations at schools, corporations, and professional organizations in the United States, the U.K., Europe, Australia, and Asia. He served on the national board of the AIGA and on the Board of Advisors for the Carnegie Mellon School of Design. He was educated at UCSC and Basel School of Design.