When it Comes to Bot Design Form Follows Function
share

If you were about to build a physical, hardware robot, how do you go about it? Probably (if you are not insane), you will start by asking yourself, “What it’s for?” What is the purpose of the thing?

This functional requirement starts the process of the design and answers most of the upcoming problems that you’ll have, whether you’re building a hardware robot, a chatbot, a voice assistant or even a full-duplex multimodal videobot.

I’ve had dozens of executives tell me that they want to build a chatbot or to use AI (or VR or blockchain or whatever), but they don’t know why. The tool is rarely about the tool - it is built for the use. To help somebody, even if that help is companionship or an ear to listen to them talk.

Most of the chatbots and voice activated assistants developed in the last few years serve much like an FAQ or a person chained to a desk who answers questions by rote from a pre-existing conversation flow. We think we can do better than that. The answers and the value that the bots offer is the start of a design and prototyping process. 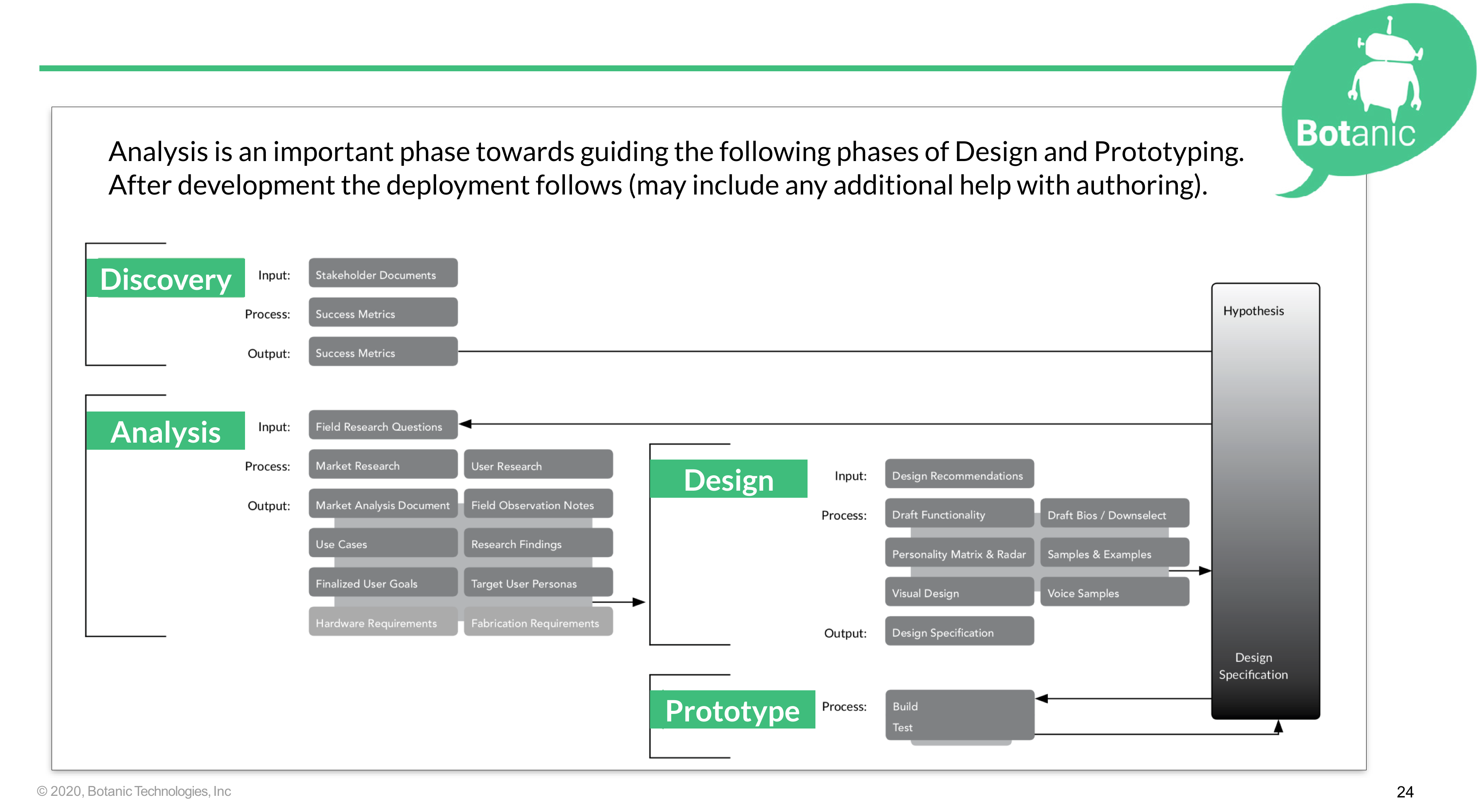 First step is collecting stakeholder documents and getting up to speed on the problems to be solved. We like to map out metrics and numeric thresholds so that we ensure we’re making our customers happy. If, for example, you have agreed to build a car it’s good to know if that car should travel at 60 mph or 100 mph.

Second, in the analysis phase, we put a lot of time into understanding the market, the users, how people will talk with the system, their goals and, essentially, ensuring that the user knows the value of the product and how to interact with it. It’s UX, but that analysis guides most of the third phase.

The design, the third major step, takes the design recommendations as input. After that the functionality, the personality, the sound of the voice and (if there’s a GUI then the appearance, including the avatar) all get documented and bolted into a design specification that everyone signs off in blood! 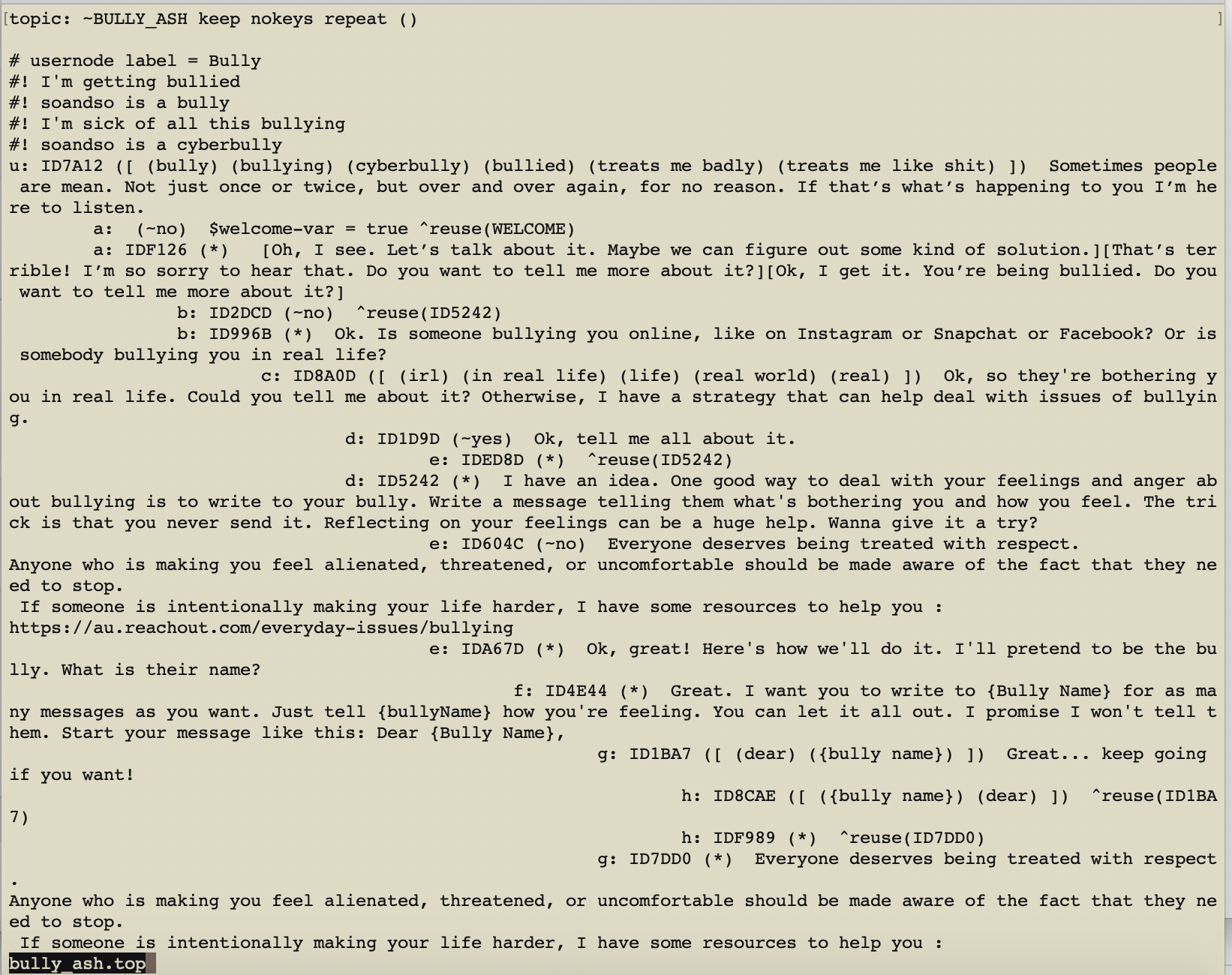 From there, prototyping starts. We go through multiple iterations of the building and testing, reviewing logs and looking at what the system did and did not understand; what the users did and did not understand, and ensuring that the high-level goals are being met according to the metrics. Meanwhile, we help our customers get the proof of concept going before handing off the content and tools to them to take forward.

The thing gets released into the wild and we track it carefully every day.

Like a hardware robot, once a bot is out in the world it begins to build relationships. Botanic is different from many other companies in this conversational AI space because our thoughts are integrated with Blockchain: we allow authentication, many people can alter the systems, and so as the robot builds relationships it also needs to be trusted.

At Botanic, we believe that conversational AI systems needs license plates. Bots can scam, spam, fish and spoof better than people. Bots should be able to be developed by many people working together, should learn, and should compensate authors for the work they’ve contributed. Our platform has been developed with these goals in mind.

In summary, our toolsets allow customers to build their own systems. Multiple stakeholders can work together on the same build, deploying bots to help them manage customer relationships. Bots that are built for verticals that are transferring high-value information, such as healthcare or finance, need authentication. By using blockchain and its distributed ledger technology to authenticate our bots, we maximize transparency and therefore trust.