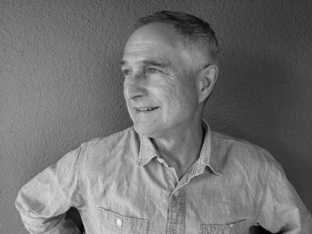 Michael Carabetta is Creative Director of Chronicle Books,
a San Francisco based publisher where he leads a multi-faceted life in design. Early on in his tenure, he took on the job of establishing Chronicle’s “spectacles” identity and applying it to a range of expressions from the business card to building architecture, including Chronicle-branded retail stores.

In addition to taking part in evaluating proposals for Chronicle’s art and design titles, Michael has instituted the Design Fellowship program, a post-graduate internship that has produced a number of full-time Chronicle designers and a host of new products developed through his weekly Design Lab seminar with the Fellows.

Michael is an occasional contributor to Chronicle Books’ blog, Design Desk, where he has written about subjects such as Chronicle’s South Park neighborhood, Hamilton Wood Type and Printing Museum, and the legacy of designer Paul Rand. He successfully lobbied Chronicle to reissue Rand’s book, Thoughts On Design. Decades out of print, this seminal work is now in its third printing and been translated into seven languages. In acknowledgment of Rand’s contribution to design, Michael also organized a series of panel discussions on Rand for Design Within Reach in their studios across the country.

Michael has conducted design workshops and lectured at
the Rhode Island School of Design (RISD), the School of Visual
Arts (SVA), and San José State University. In addition, he
has taught design at California College of the Arts (CCA)
and at the Stanford Publishing Course.

His work has received recognition in the American Institute of Graphic Arts (AIGA) 50 Books/50 Covers shows, and in Graphis Books I and II. His projects have appeared in design publications including Communication Arts (CA), Critique, and I.D. magazines, and have received awards from the San Francisco Ad Club, New York Art Directors Club, and the Western Art Directors Club.

Prior to joining Chronicle Books, Michael worked for Landor Associates directing corporate identity projects in their San Francisco, London and Hong Kong offices. He is a former treasurer of the AIGA San Francisco chapter; in association with Litquake and the chapter he organized Books X Design, an exhibition of the best in Bay Area book design. He is a member of the board of directors of the Center for the Art of Translation, and the Book Club of California where he serves on the Publications Committee.

A Connecticut native, Michael attended the Paier College of Art there and received his MFA from Cranbrook Academy of Art
in Michigan. When he isn’t collecting books for his extensive home library, he can be found on his road bike or in his woodshop.