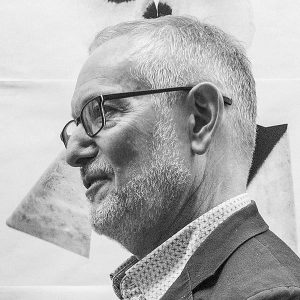 Martin Venezky is a designer, artist, and educator specializing in book design and typography. Throughout his career, Venezky has maintained a deep and continued interest in photographic process, form generation, and abstraction. For the past several years, he has created extensive bodies of work in photography and photographic installation.

Venezky has an undergraduate degree from Dartmouth College and an MFA in Design from Cranbrook Academy of Art. He has taught at RISD and CalArts and, for almost thirty years, at California College of the Arts in San Francisco, where he is currently Professor in the Graduate Design Program.

In 2001 the San Francisco Museum of Modern Art honored Venezky with a solo exhibition, and, in 2005, his monograph, It Is Beautiful…Then Gone, was published by Princeton Architectural Press.

Among other honors, Venezky was invited into the esteemed Alliance Graphique Internationale (AGI), and San Francisco’s Letterform Archive has recently acquired an extensive collection of is work, studies and process for their permanent collection.

Although a longtime resident of San Francisco, Venezky has recently relocated to Michigan to study towards an MFA in Photography at Cranbrook, thirty years after receiving his design degree from the same institution.