The first time I got fooled by a magician was when I was six years old. An uncle, or family friend—somebody—borrowed a dollar from me, poked a hole through it, ripped out the pencil and restored the dollar. It was completely fine, no tears or anything. (David Copperfield did this on TV in the 80s.)

Magic has influenced my whole life since that moment; it probably is the reason I’m a designer. In a way, magicians and designers do the same thing. They communicate emotional experiences directly to audiences based on an observation of human behavior, desires, and instinct. But instead of manifesting their discoveries in a slick brand launch or a shiny new product, magicians use their insights to produce a card out of thin air, read minds, swallow needles strung perfectly on a piece of thread, and other effects. Magicians and designers are both researchers, subverting the ordinary to create the extraordinary, which is something that design in its finest moments hopes to achieve. 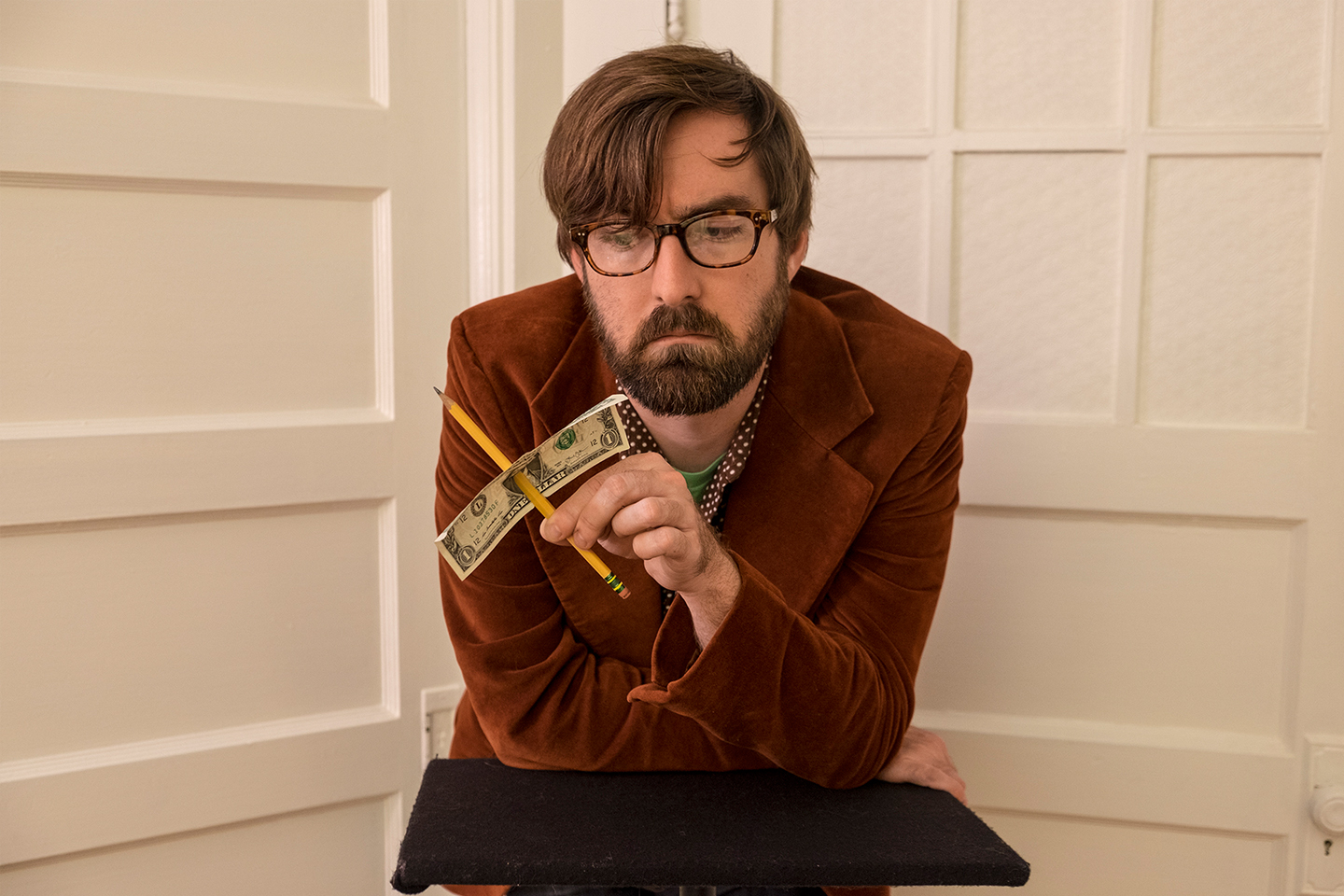 My passion for creating visual experiences, as a magician, first began at the age of 7. Soon after, I began performing paid gigs, and, as a teenager, I joined a group of magic misfits at Hollywood’s famous Magic Castle, perfecting my trade to work their storied stages. But magic was always a side project, and when I graduated college I found myself working as a designer. I still think about some key lessons learned in those years of training every day, notably: where your audience is, how to be nice and be in control, and how reality is relative.

Of course, the designer is a master of creating material for a particular audience; research can suggest a set of solutions based on findings that this audience wants to feel, what we want them to think when they see our work. As a magician, I realize that where the audience is can have as much of an impact on their experience of the work as its content.

In magic, we’re terribly alert over an audience’s position: not necessarily because it will reveal our tricks— no— it’s because we know certain effects work better than others for certain sized audiences, certain distances, and certain conditions (like wind, or lighting). There’s a beautiful effect I do that involves playing cards and wine glasses: this trick doesn’t work for an audience that’s more than 20 feet away— and it works even less for large audiences (more than 40). The people in the back can’t see and they lose interest. Magicians will be extra perceptive to this to ensure the show is truly enjoyable, and a really engaged audience is always a fun, exciting way to perform.

This can be dramatically effective in elevating and informing decisions for a wide range of applications; environmental graphics, exhibitions, and print are some relevant categories. Here is a question that I’ve seen clients get surprised at. Where is a print piece being deployed? “Well, the ticket desk of the Museum.” Ok. We stroll down there to see that there’s seven other pieces of print collateral, plus 3 separate queues, plus additional signage— and there’s additional things happening at the ticket desk like putting on stickers, up-selling of memberships, etc. So, the question of “Where’s the audience?” ends up prompting a complete rethinking of the entire ticket desk, because we realize it was so saturated, and much of the information was redundant. Instead of signage explaining gallery photo policies, discounts for food, membership-upgrades, we revitalized the entire area by creating more precise language to tickets, refining signage, and creating a more direct script for staff.

Presentation is Everything— Be nice about being in control

I get obsessive about how I present work to clients and colleagues. I prefer face to face meetings specifically so I can see their reactions: good or bad. Skype or telephone just doesn’t do the trick. Clients can use technology to mask their genuine reactions and start building up walls, which erodes the trust you want to have with one another.

As a performer I have learned to read the body language and facial expressions of the audience; this is perceptible even in my peripheral vision— performers may use this knowledge to adjust the performance. Perhaps it needs to be more mellow, or more energetic? Sometimes it’s because the audience doesn’t know who you are yet, so take a moment to connect with them emotionally.

This plays out exactly the same when presenting work with clients. I need to be in command of the presentation they are viewing: standing near the screen, with them close to me, looking toward me, and putting gaps in the presentation so they look back at me. (Otherwise, people will just stare at the screen.) Never, ever sit! This is a show to present your (or your company’s) ideas. You are on stage and deserve the respect of an audience to a performer.

I’ve used magic techniques to control the situation. I’ve used nonverbal cues to seat clients. I’ve positioned my team so that there’s only one available seat left for the client. Oh, I’ve removed chairs, too, so there’s only so many options to sit. This is all done in the service of getting things going quickly.

Magicians are excellent at asking questions that help redefine the problem to be solved— “what’s the resolution of your eyesight?” for example.

Around 1908, a gentleman named Theodore DeLand wanted to make cards appear from his hand. Ok. Well, first of all, you can’t just wish cards to appear in your hand— that’s a violation of reality. However, you can do this using a very difficult sleight of hand— using complicated movements to hide the cards until you want the audience to see them. But DeLand observed a way to exploit an insight into human eyes: the resolution of vision diminishes over short distances. With this, he observed that the difference between two-dimensional and three-dimensional imagery (say, a photograph) was very difficult to discern: His solution was to create a playing card that had the image of an open hand printed on it. So, when the card was held in your hand, it appeared like, at a casual glance, that your hand is empty. Thus, other cards could be concealed behind this card, and he would turn his hand over and produce a fan of cards, taking the “gimmicked” card along with those. A miracle invented to solve a problem he had invented. He out-thought the rules of reality by creating his own 2-D reality.

As designers we find ourselves in the same situation and are proudly the kinds of people who want to solve crazy ridiculous problems with crazy ridiculous solutions. Sometimes, though, you get stopped: “Metal doesn’t work that way.” “iOS doesn’t do that.” Insert your own example here. A frequent reply I have to no-no’s is an around-the-bend kind of approach: “How can I make it appear like what I want?”

When I was Design Director at the Contemporary Jewish Museum, we had an exhibit about Mah Jongg that had an awkward window display, about 40 feet long, with an interior depth of about 36 inches. We had this vision to produce enormous replicas of Mah Jongg tiles to animate the space to people walking past. When we mocked up in the model shop the whole thing looked crowded and over-stuffed: the depth of each tile was going to prove difficult to hang based on the available grid. I remember our preparator saying, “We just need more depth here, if we had 3 more feet we could make this look cool.” Suddenly an old theater trick came to mind: let’s simply change the scale of the tiles to appear as if they’re becoming smaller. 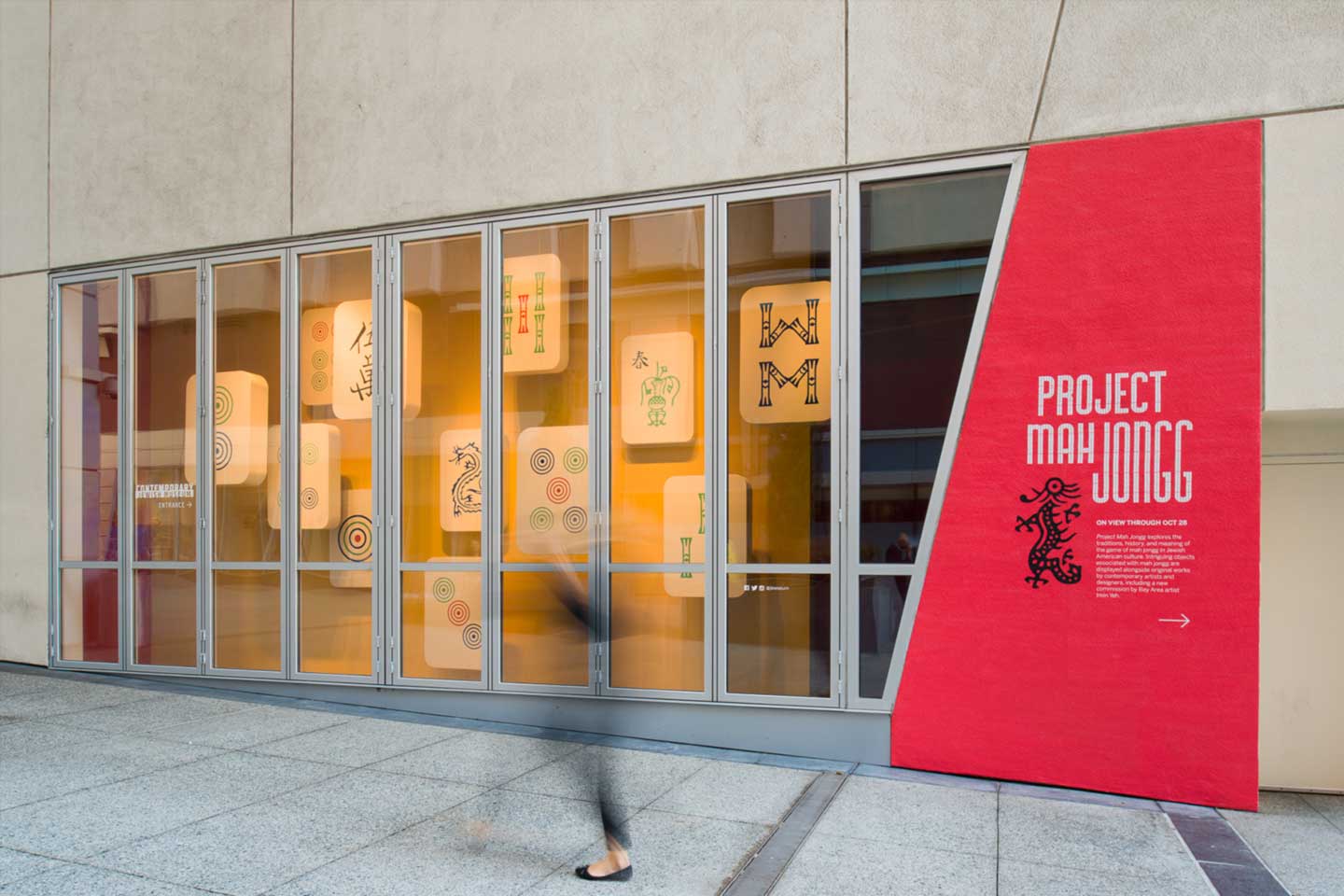 So we built three sets of tiles each about 15 percent smaller than the previous set: the tiles on the back wall are smallest, and the ones closer to the glass are the largest. This gave the display the illusion of more space; the tiles, in reality, were inches away from each other, but the exaggerated depth gave the illusion that they were feet apart. (This same trick is used by set designers and is best exemplified at Disneyland’s Main Street USA: the buildings get smaller as they get higher up. The concept is called “Forced Perspective.”)


I wonder if I would have found my way to design without the introduction to the world of magic as a kid. My whole life is about visual experiences: I came to design after an attempt at being a painter, sculptor and installation artist. Magic combines all the technical, scholarly, experimental, and emotional work of being an artist and a researcher; you get to make things, and you learn all the time. By now, I think my brain has been rewired to think magically.

The goal of magic should never be to deceive. There's this great old Vaudeville magician named Howard Thurston. He’d start his shows by saying: “I wouldn't deceive you for the world.” And while he proceeded to do just that, there was this calm and positive energy about his statement: he’s inviting you to go along with the ride. Inviting the audience to let themselves be fooled. The difference between deception and mystery is the intent of the performer and the consent of the audience— a three-card monte on a cardboard box in a back alley, or a bespectacled man in a velvet jacket inviting you into the possibility of the impossible.

As designers we share that responsibility: to be honest and genuine. To never deceive, and to always think about the possibility of amazing outcomes— impossible and charming ways to reach out and connect with people. There’s a feeling I hope we all aim for: it’s that feeling right after seeing a magic trick. It’s that feeling of wonder, the joy of the unknown. It’s that tingly, electric feeling. It’s addictive. When I think about the work we can do as designers, and I think about the work I want to make, it’s with the intent of creating a moment for people to feel that lovely feeling. So, perhaps, the next time you’re creating something, try and find that emotion; see if you can bottle it up or enliven your thinking, your hopes for your audience. Make a mystery.

An incredible introduction to magic was written by my good friend Richard Kaufman, it’s called Knack Magic Tricks: A Step-By-Step Guide To Illusions, Sleight Of Hand, And Amazing Feats. Also, please have a fun time checking out the work of experimental psychologist Dr. Richard Wiseman.

Also, if you live in San Francisco, go see Joe Pon at Misdirections Magic Shop on 9th Avenue in the Inner Sunset; he’s one of the last remaining magic shops on the West Coast. Go support your locally owned (magic shop).

And, shameless plug: My show, The Magic Magic Show Show, which features me and fellow designer Andrew Evans doing magic and thinking about design will be playing at Doc’s Lab on October 26th, tickets are available now—hurry before they sell out.
X