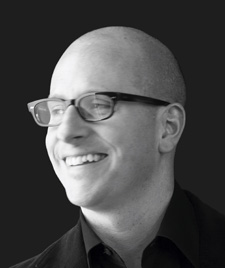 Eric Heiman grew up in the backwoods of western Pennsylvania and attended Carnegie Mellon University in Pittsburgh where he completed a Bachelor of Architecture in 1992. His winding, post-graduate path finally led him to the Bay Area where he studied graphic design at the California College of the Arts (CCA) and then later co-founded (with Adam Brodsley) the multidisciplinary studio Volume Inc. in 2001.

Volume’s work has been exhibited, honored by, and published in the Cooper Hewitt Design Museum, the San Francisco Museum of Modern Art, the San Francisco Museum of Craft and Design, the Denver Art Museum, the International Biennial of Graphic Design in Brno, Communication Arts, Eye, Graphis, ID, Step Inside Design, Print, How, Exhibitor, Coupe, Étapes, the Type Directors Club, AIGA, the Western Art Director’s Club, the German Design Council, and the 2003, 2005, and 2007 California Design Biennials at the Pasadena Museum of California Art. In 2013, the Western Gallery in Bellingham, Washington exhibited a solo show of Volume’s work as part of their ongoing Masters of Design series.

Eric is an Associate Professor of Design at the California College of the Arts (CCA), where he has taught since 1999 and was awarded the college-wide Excellence in Teaching award in 2003. His writing on design has been published in Eye and Emigré, and he is a contributing writer for SFMOMA’s Open Space online publication. Eric has judged competitions, delivered multiple lectures, moderated panels, curated design conferences and even one film festival. He continues to indulge his interest in LP sleeve art, spending way too much money on record covers designed by Vaughan Oliver, Peter Saville, and Barney Bubbles among others.