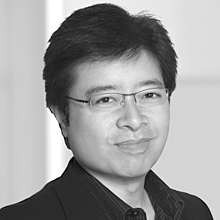 Earl was named in Graphic Design USA’s 50th Anniversary Survey as one of the publication’s 50 “Most Influential Graphic Designers Working Today” and one of its “People to Watch in 2010”. He was also one of only 50 U.S. graphic designers selected for the international edition of Who’s Who in Graphic Design. He has served on a United Nations-sponsored Delegation on Package Design which toured the People’s Republic of China, lectured at leading universities and design organizations, and served as a frequent juror for major design competitions, including Communication Arts, AIGA DC, Spark, Creativity, Critique, Step By Step, Publish, and Exhibitor. Gee + Chung Design has been profiled in the Adobe Website Gallery, Adobe Creative Suite 3 Workflow Guide, Rockport Publishers Graphic Design: America 2, Graphis Designers USA 2, Graphis Branding USA 1 and 2, DIGIT (U.K.), and Designer’s Workshop (Japan).

Earl began his career as a designer at Landor Associates, San Francisco, creating identity programs for Fortune 500 companies. As a senior designer at Mark Anderson Design, Palo Alto, he designed award-winning branding programs for Herman Miller, PG&E, and the Oakland Museum. He received his BFA in Graphic Design with Distinction from Art Center College of Design and was included in Design Impact: A History of Art Center College of Design. Earl has demonstrated a strong commitment to his alma mater, having designed award-winning brands for the Art Center Alumni Council, Art Center DOT Launch, and The Design Accelerator.

Among his many formative experiences with AIGA San Francisco, Earl has served on the AIGA SF Events Committee, as a mentor for the AIGA SF Urban Forest Mentoring Project, and been exhibited in 25 Years of AIGA San Francisco, the AIGA SF Environmental Poster Show, the AIGA SF cause/affect Awards Exhibition, and Alphabetilately A to Z at the Smithsonian National Postal Museum. His most rewarding experience was the opportunity to serve on the AIGA SF board as Membership Chair, helping to increase AIGA SF membership from 1,200 to nearly 1,800 members during his term, establishing AIGA SF the second largest chapter in the nation. He was also honored to represent AIGA SF at the AIGA National Leadership Retreat, presenting on membership engagement.