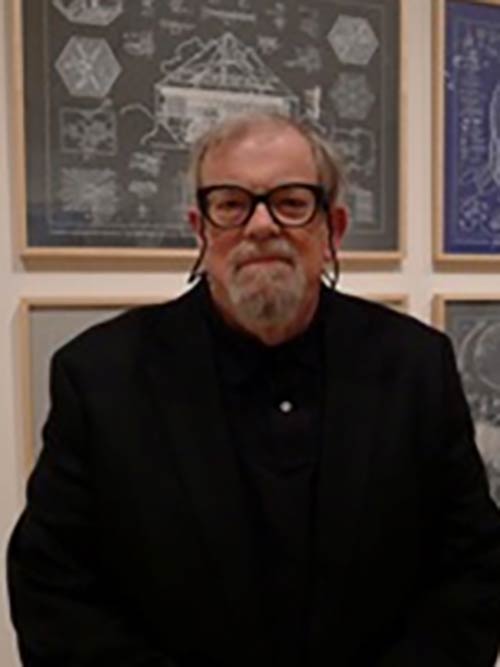 In 1985 Chuck Byrne opened Chuck Byrne Design here in the Bay Area. For six years previously he headed the studio Colophon in Cincinnati. For most of his 50-year career his clients have been cultural and educational institutions.

His graphic design work has appeared in CA, Idea, ID, Graphis, and PRINT magazines. The San Francisco Museum of Modern Art, Detroit Institute of Arts, Museum of Modern Art, Denver Art Museum, Los Angles County Museum, and the Cooper Hewitt National Museum of Design have examples of his work. An early 1980s collaboration with Buckminster Fuller, “Inventions: Twelve Around One,” a portfolio of 12 prints, has been included in exhibitions at the Whitney Museum of American Art, Chicago’s Contemporary Art Museum, and SFMOMA. For over a decade Chuck has advised SFMOMA, The Denver Museum of Art, and LACMA on building their graphic design collections.

Chuck has been on the graphic design faculty of San Jose State University, the California College of the Arts and the University of Cincinnati.

In addition to serving as contributing editor and writer for PRINT magazine for more than a decade, he has written for Emigre and Eye magazines. His articles are included in several graphic design anthologies including Looking Closer: Critical Writings on Graphic Design and The Education of a Graphic Designer.

In the late 1980s and early ’90s, recognizing the emerging importance of the computer to graphic design, Chuck produced several critical events on the subject for AIGA San Francisco and participated in similar events around the country including AIGA conferences. During this time he wrote important articles on the subject for the AIGA Journal, Graphic Design USA, and other design publications.